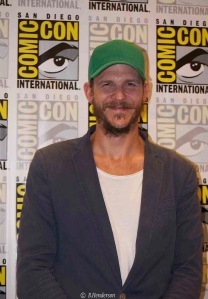 Additionally, HISTORY’s new scripted drama “Knightfall” which centers on the elite and mysterious military order of the Knights Templar, starring Tom Cullen, will make its SDCC debut with a “Knightfall: Guardians of the Gear” outside activation and a “Knightfall” inspired comic book entitled “Truth & Lies.”

Please see details below and join in on the conversation by using #VikingsSDCC @HistoryVikings and #KnightfallSDCC. 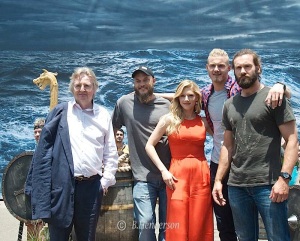 HISTORY’s VIKINGS PANEL: Friday, July 10 from 3:30-4:30 p.m., Room 6A Vikings returns to SDCC fresh from the season four set. Travis Fimmel (Ragnar), Katheryn Winnick (Lagertha), Clive Standen (Rollo) and Alexander Ludwig (Bjorn) along with Michael Hirst (writer/creator) and Dirk Hoogstra (EVP & General Manager, HISTORY) will reveal an exclusive sneak peek of the new season. Don’t miss out – come join them and find out what the gods have in store for season four! END_OF_DOCUMENT_TOKEN_TO_BE_REPLACED

This Comic Con was even more special for fans of the History Channel tv show “Vikings” since they were holding their first panel at the event! I was able to get some shots of the cast from the press room on Friday. The cast was amazing and super nice to all and really appreciated all the fans who attended the panel.

“As Americans, you like to say that family comes first,” Hirst told Room 6a, “The same can be said of the Vikings. Ragnar bred a lot of sons who became famous in their own turn. When he died, they finally declared war on the whole world.” Hinted Winnick: “Her relationship with Bjorn and Ragnar is tested. We learn that our son is older and it’s interesting to see if she is stronger or weaker in that situation.”As far as the rumors about the series jumping ahead in its historical timeline, Hirst hinted that he’s not leaping too far into the future given the cliffhangers left in Episode 9 which “need resolution before we go ahead.”

Friday night Day 2 was just amazing since I was able to do the photographs for the “Vikings’ press room. Travis Fimmel, Clive Standen, George Blagen, Gustaf Skarsgard (yes Alex’s brother!), Jessalyn Gilsig, Katheryn Winnick were there representing the cast of the popular History channel. They cast was excited about the upcoming season 2.

My night was just perfect when Gustaf noticed that I was wearing a green Hammarby soccer shirt! He gave me a thumbs up and wanted me to join him on the red carpet. 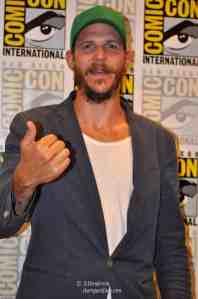 Fans also enjoyed the off site Vikings boat race and the shield maidens were there for photos:

Fans can’t wait for the new season! Huge thanks to History channel and the cast for making Comic Con 2013 a lot of fun and a great success!

This fan site is in no way affiliated or linked with "Vikings" show, cast, their management or anyone affiliated with the show. This website was created for entertainment value only. If there is any content on this website that you feel violates your personal property/copywright, please let us know and it will promptly re-credited or removed.

Images and information on this site are not posted for commercial gain, and are used under the 107 Limitations on exclusive rights: Fair use Law 107. All images and information are property of their respectful owners. This site does not claim any copywrights, no infringement intended.